Göbekli Tepe just doesn’t make sense. The neolithic archaeological ruins were first uncovered in the ’60s, but their significance wasn’t truly realized until 1994. The site is located in southeastern Turkey – although it predates the establishment of the country by a significant amount of time. In fact, Göbekli Tepe is so old and complex that it is rewriting our understanding of not just Turkish history, but rewriting human history of humanity. Based on everything we know about how modern civilization got its start, Göbekli Tepe should not exist. However, exist it does, and has for nearly 12,000 years.

Archaeological study of Göbekli Tepe has been going on for quite some time—even though the modern political climate in Turkey has made matters slightly more difficult. Some sections are even in the process of being restored. The site has become a tourist attraction and a source of local pride, and there are plenty of good reasons for that. Göbekli Tepe is, after all, the oldest site of significance created by human beings, and that makes it one of the most important archaeological discoveries ever made in the vein of rewriting human history.

Göbekli Tepe is a site that practically begs for archaeological study. The structures that make up the site are amazingly well-preserved, allowing archaeologists to study them in something similar to their original state. Part of the reason for the remarkable preservation of Göbekli Tepe is due to the climate in Turkey, but another major factor is the fact that many of the temple sites appear to have been backfilled before being abandoned. This allowed the structures to remain protected from the elements as the centuries wore on, preserving their history for modern humans to discover.

It Predates Stonehenge, Sumer, Writing By Over 6,000 Years

The Architecture Was Far Ahead Of Its Time

The fact that Göbekli Tepe is so old isn’t the only significant thing about it. The skilled architectural style seen in the construction of its many “temples” is seriously impressive, and would be in any era. The combination of the site’s age and construction quality, however, is what makes it such an earth-shaking revelation for the archaeological world. The craftsmanship seen at Göbekli Tepe is thousands of years ahead of its time, and dates back to long before such construction should have been possible.

The manpower, engineering, and project managing required for such an endeavor all seem unfeasible, given where human civilization was understood to be at the time. The very existence of Göbekli Tepe has forced archaeologists to re-think the dawn of civilization.

The Largest Top Stones Weigh Up To Ten Tons

At the center of the construction of the various temples in Göbekli Tepe are a series of massive pillars topped with heavy stone blocks. The pillars themselves weigh tens of tons, with estimates ranging between 20 and 60 tons – which would have made even bringing them to the central location a Herculean task. That’s to say nothing of placing large stone blocks on top of them. The blocks themselves weigh up to ten tons, leaving archaeologists scratching their heads as to exactly how the ancient engineers building Göbekli Tepe got the job done.

It's Massive In Range, With Over 20 Individual Sites

At first, the site of Göbekli Tepe was thought to be a singular temple construction. However, over time, it has been discovered that the site is actually quite large and completely covered with temples. It seemed that everywhere archaeologists dug, another temple popped up. There are more than 20 individual sites that have been uncovered, each of them constructed with a similar design, but with slightly differing qualities.

Some think that the large number of sites suggests some sort of trial-and-error process. On the other hand, the people who built the temples might have just felt the need to construct a couple dozen of them!

It Shakes Up Our Understanding Of The Beginnings Of Agriculture

The discovery of Göbekli Tepe has the potential to change much of our understanding of the dawn of civilization, and especially the role that agriculture played. It had previously been assumed that permanent human settlements first arose when humanity gained the ability to farm – which allowed them to live a more stable life than hunting and gathering did. However, the construction of Göbekli Tepe predates the development of agricultural practices by quite some time, suggesting that some humans had created permanent settlements long before they started farming.

Carved directly into vibrant red, white, pink, and sandstone cliff faces, the prehistoric Jordanian city of Petra was “lost” to the Western world for hundreds of years. Located amid rugged desert canyons and mountains in what is now the southwestern 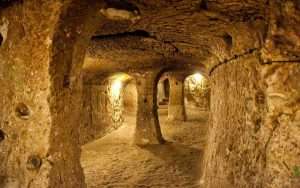 The ancient Turkish city of Derinkuyu could house up to 50 thousand people, reached eleven stories below ground, and was built in the 7th or 8th century by Christians hiding from persecution. The story goes: In 1963, a man in