Prophetic Visions of Future Technology from 1907

Replace these “wireless telegraphs” with smartphones, update the dress a little, and these prophetic visions from a 1906 issue of Punch magazine could easily be for 110 years in the future. Part of a series of “forecasts” for the year to come, the caption reads: “These two figures are not communicating with one another. The lady receives an amatory message, and the gentleman some racing results.” It’s a reminder that the idea of technology leading to a breakdown in “authentic” human interaction is a worry not solely limited to our age. Punch seemed to have a knack for uncanny predictions of distant technologies to come. See for example this vision of the Skype-like “Telephonoscope” from 1879.

Using Skype During The Victorian Era

Conceptualized in the late 1870s through the 1890s, the telephonoscope was an early concept of prophetic visions in videophone and television, mentioned in various early science fiction works written by Albert Robida, a French illustrator, etcher, lithographer, caricaturist, and novelist. His device was a flat screen television display that delivered the latest news 24-hours a day, the latest plays, courses, and teleconferences. 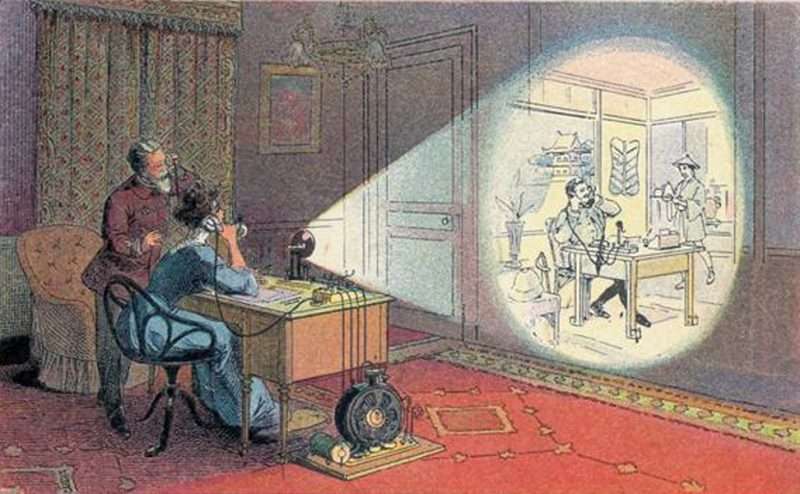 The cartoon above is from the pen of George du Maurier, printed in the Punch Almanack for 1879. Although titled “Edison’s Telephonoscope” it is not, in fact, a creation of Thomas Edison’s at all (either realised or proposed) but rather an imagining by Maurier of what the great inventor might come up with next: a machine which, for all intents and purposes, amounts to some kind of Victorian Skype. A mother and father — the “Pater- and Materfamilias” — sit at home and converse with, while also viewing, their children at play across the other side of the world. The caption reads:

(Every evening, before going to bed, Pater and Materfamilias set up an electric camera obscura over their bedroom mantel-piece, and gladden their eyes with the sight of their Children at the Antipodes, and converse gaily with them through the wire.) Paterfamilias (in Willow Place): “Beatrice, come closer, I want to whisper.”

More images followed Maurier’s, including one from a set of trading cards entitled “In the Year 2000” (En L’an 2000) which were sold as souvenirs at the 1900 Paris Exposition (see image below). The particular card in question – entitled “Correspondance Cinema-Phono-Telegraphique” – shows an invention very similar to that pictured in Maurier’s. Interestingly, at the same Paris show, a Russian scientist named Constantin Perskyi read a paper to the International Electrcity Congress in which he described a device called “Television”, seemingly prophetic visions pertaining to the first time the word had ever been used.

An Old World Prophetic Vision of the Year 2000

A series of futuristic pictures and prophetic visions by Jean-Marc Côté and other artists issued in France in 1899, 1900, 1901 and 1910. Originally in the form of paper cards enclosed in cigarette/cigar boxes and, later, as postcards, the images depicted the world as it was imagined to be like in the then distant year of 2000. As is so often the case their predictions fell some way off the mark, failing to go far enough in thinking outside the confines of their current technological milieu (hence the ubiquity of propellors, not to mention the distinctly 19th-century dress).

There are at least 87 cards known that were authored by various French artists, the first series being produced for the 1900 World Exhibition in Paris. Due to financial difficulties the cards by Jean-Marc Côté were never actually distributed and only came to light many years later after the science-fiction author Isaac Asimov chanced upon a set and published them in 1986, with accompanying commentary, in the book Futuredays: A Nineteenth Century Vision of the Year 2000.