The Beauty of Crystal Gazing

Crystal gazing (also known as crystal-seeing, crystallism, crystallomancy, gastromancy, and spheromancy) is a method for seeing visions achieved through trance induction by means of gazing at a crystal.  Traditionally it has been seen as a form of divination or scrying, with visions of the future, something divine etc., though research into the content of crystal-visions suggest the visions are related to the expectations and thoughts of the seer or telling your own fortune.

The term crystal gazing denotes several different forms of a variety of objects, and there are several schools of thought as to the sources of the visions seen in the crystal gazing trance. Crystal gazing may be used by practitioners—sometimes called “readers” or “seers”—for a variety of purposes, including to predict distant or future events, to give character analyses, to tell fortunes, or to help a client make choices about current situations and problems.

With respect to the tool or object used to induce the crystal-gazer’s trance, this can be achieved with any shiny object, including a crystalline gemstone or a convex mirror— but in common practice, a crystal ball is most often used. The size of ball preferred varies greatly among those who practice crystallomancy. Some gazers use a “palm ball” of a few inches in diameter that is held in the hand; others prefer a larger ball mounted on a stand. The stereotypical image of a gypsy woman wearing a headscarf and telling fortunes for her clients by means of a very large crystal ball is widely depicted in the media and can be found in hundreds of popular books, advertising pages, and films of the 19th, 20th and 21st centuries. The pervasiveness of this image may have led to the increased use of fairly large crystal balls by those who can afford them.

Books of instruction in the art of crystal gazing often suggest that the ball used should be perfectly spherical (that is, without a flat bottom) and should be supported in a wooden or metal stand. If made of glass (e.g. lead crystal), it should be free from air bubbles but may be colored. If carved from natural crystalline stone (such as quartz, beryl, calcite, obsidian, or amethyst), it may display the natural coloring and structure of the mineral from which it was fashioned. Some authors advise students to place a sigil, seal, or talismanic emblem beneath a clear sphere, but most do not. Most authors suggest that the work of crystal gazing should be undertaken in a dimly-lit and quiet room, so as to foster visions and more easily allow the onset of a trance state.

Some practitioners claim that crystal gazing engenders visionary experiences and preternatural and/or supernatural insight, while other practitioners and researchers assert that the visions arise from the subconscious mind of the crystal gazer. Some authors note that the two positions are not mutually incompatible, and that the possibility of showing the gazer’s subconscious mind does not preclude the possibility of seeing the future or other supernatural insight.

The Milgram Obedience Experiment: Jaw-Dropping Sheeple Psychology Milgrams Experiment on Obedience to Authority Gregorio Billikopf EncinaUniversity of California Why is it so many people obey when they feel coerced? Social psychologist Stanley Milgram researched the effect of authority on obedience. 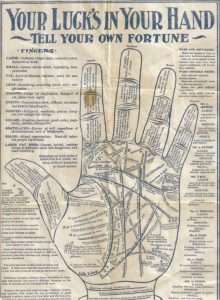 4 easy ways to tell your own fortune using this chart

Identify The 4 Major Lines of the Palm The Heart Line Discover an easy way to tell your own fortune by following this step-by-step list.  The heart line runs horizontally across the top of the palm. It represents both the