Zero and the hidden meaning

Zero is representative of the primordial void, the womb, the realm of potential and the meaning.

The appearance of the number in numerological analysis indicates the presence of internal capabilities and forces inherent in you from birth. To reveal the existing potential, it is necessary to make personal efforts, focusing on the signs of Destiny granted to you from above.

0’s in the date of birth are the reserves of past incarnations, which a person may not even suspect. But to have these qualities manifested in the most favorable way, a person must make an informed choice between Light and Darkness.

Represented number 0, especially if it is repeated, indicates the need to develop your spiritual aspect. 0 in itself is regarded in numerology as the beginning of a secret spiritual journey. If this opportunity is neglected, a positive version of the course of events can turn to its opposite side.

The infinite abyss of energy, concealed in zero, can create or destroy, depending on the direction of human desires. It should be mentioned that the concept of death has the same metaphysical meaning as in the Tarot system, which means the completion of the life cycle, the possibility of renewal and transformation. 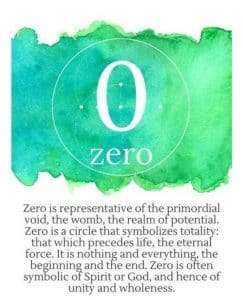 Zero and the hidden meaning

Zero is representative of the primordial void, the womb, the realm of potential and the meaning.   Remarkable Zero Positive features of zero number The positive meaning of number 0 in numerology reflects such aspects as universal energies, harmony, primordial 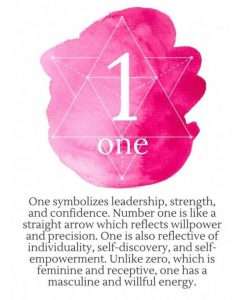 The magical power of the number one

The Number One symbolizes leadership, strength and confidence. Number one is like a straight arrow which reflects willpower and precision.   Strengths of the number one Independent: Of all the numbers in Numerology, the 1 is the most self-sufficient, needing