Ayahuasca has been used by Shamans and those they help for hundreds if not thousands of years. Found all over the Amazon, Ayahuasca and it’s incredible ability to heal has been slowly but steadily creeping into western consciousness. Metamorphosis is a documentary that follows several westerners as they undergo five Ayahuasca ceremonies and experience the gamut of emotions – from utter fear to outright ecstasy. It also explores the shamans who work with the medicine as well as all the key elements of an Ayahuasca ceremony.

The film also tells the story of Hamilton Souther, who earlier in life had no belief of and in spirit. After having a spiritual awakening, Hamilton is led to the Amazon where he apprentices as an Ayahuascero, or person who practices medicine with Ayahuasca. Hamilton and Maestro Don Alberto (an indigenous master shaman for over thirty years that practices with Hamilton) take us through the ceremonies as well as explain the meaning behind them. In an all new episode of Hamilton’s Pharmacopeia, he explores magic mushrooms with the help of shamans, clandestine growers, and ethnomycologists. He travels everywhere from the aztec empire to an underground laboratory on his quest to learn more about this 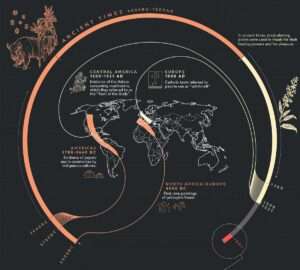 Visualizing The History Of Psychedelics (infographic)

In part one of this two-part series of history Of psychedelics, we unearthed the story behind the prohibition of psychedelic substances, and how strict regulations resulted in a hugely stigmatized industry. Over the last decade however, Visual Capitalist explains below