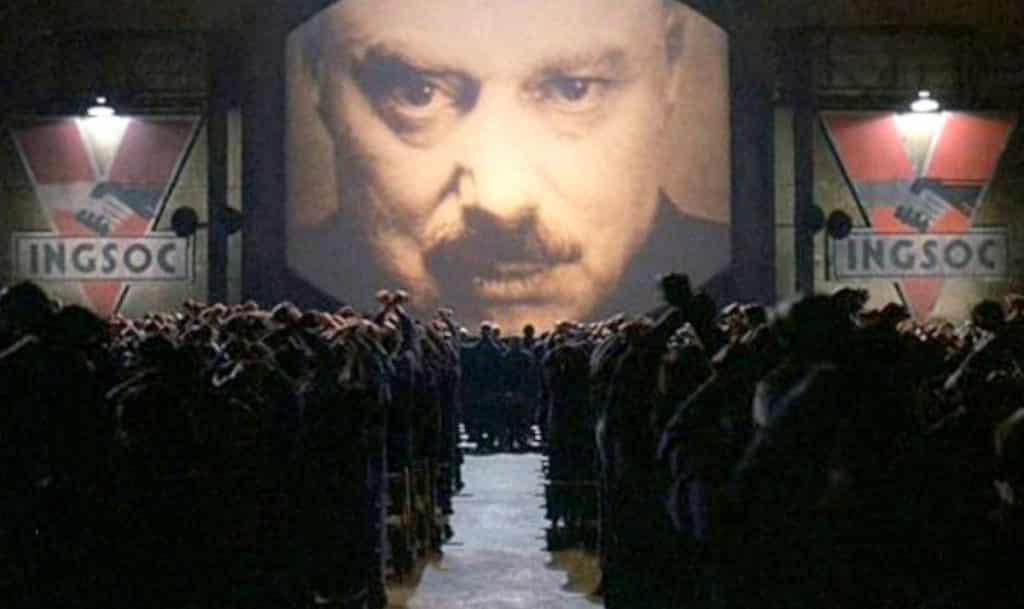 In George Orwell’s 1984, Winston Smith, an intellectual and member of the Outer Party (middle class), lives in the ruins of an England already ravaged by World War II, civil conflict, and the revolution which brought the Party to power. At some point in the past he was separated from his family, placed in an orphanage, and trained as a civil servant by the state.

Winston leads an austere existence, confined to a one-room apartment on a subsistence diet of black bread and synthetic meals washed down with Victory-brand gin.

He begins retaining a journal criticizing the Party and its enigmatic leader, Big Brother, which – if uncovered by the Thought Police – likely warrants certain death. The flat has an alcove, beside the telescreen, where Winston apparently cannot be seen, and thus believes he has some privacy, while writing in his journal: “Thoughtcrime does not entail death. Thoughtcrime IS death.”

The telescreens (in every public area, and the quarters of the Party’s members), have hidden microphones and cameras. These devices, alongside informers, permit the Thought Police to spy upon everyone and so identify anyone who might endanger the Party’s régime; children, most of all, are indoctrinated to spy and inform on suspected thought-criminals – especially their parents.

At the Minitrue of George Orwell’s 1984, Winston is an editor responsible for historical revisionism, concording the past to the Party’s ever-changing official version of the past; thus making the government of Oceania seem omniscient.

As such, he perpetually rewrites records and alters photographs, rendering the deleted people as “unpersons”; the original documents are incinerated in a “memory hole”. Despite enjoying the intellectual challenges of historical revisionism, he becomes increasingly fascinated by the true past and tries to learn more about it.

Concurrent themes in the book

George Orwell’s 1984 expands upon the subjects summarized in Orwell’s essay “Notes on Nationalism” about the lack of vocabulary needed to explain the unrecognized phenomena behind certain political forces. In George Orwell’s 1984, the Party’s artificial, minimalist language ‘Newspeak‘ addresses the matter.

Positive nationalism:
Oceanians’ perpetual love for Big Brother; Neo-Toryism and Celtic nationalism are, as Orwell argues, defined by love.
Negative nationalism:
Oceanians’ perpetual hatred for Emmanuel Goldstein; Stalinism and Anglophobia are, as Orwell argues, defined by hatred.
Transferred nationalism:
In George Orwell’s 1984, Oceania’s enemy changes and an orator changes mid-sentence. The crowd instantly transfers its hatred to the new enemy. Transferred nationalism swiftly redirects emotions from one power unit to another (for example, Communism, Pacifism, Color Feeling, and Class Feeling). It happens during Hate Week, a Party rally against the original enemy. The crowd goes wild and destroys the posters that are now against their new friend, and many say that they must be the act of an agent of their new enemy and former friend. Many of the crowd must have put up the posters before the rally but think that the state of affairs had always been the case.

In the book George Orwell’s 1984, Inner Party member O’Brien describes the Party’s vision of the future:
There will be no curiosity, no enjoyment of the process of life. All competing pleasures will be destroyed. But always—do not forget this, Winston—always there will be the intoxication of power, constantly increasing and constantly growing subtler. Always, at every moment, there will be the thrill of victory, the sensation of trampling on an enemy who is helpless. If you want a picture of the future, imagine a boot stamping on a human face—forever.

A major theme of George Orwell’s 1984 is censorship, especially in the Ministry of Truth, where photographs are modified and public archives rewritten to rid them of “unpersons” (persons who are erased from history by the Party). On the telescreens, figures for all types of production are grossly exaggerated or simply invented to indicate an ever-growing economy, when the reality is the opposite. One small example of the endless censorship is Winston being charged with the task of eliminating a reference to an unperson in a newspaper article. He proceeds to write an article about Comrade Ogilvy, a made-up party member who displayed great heroism by leaping into the sea from a helicopter so that the dispatches he was carrying would not fall into enemy hands.

In George Orwell’s 1984, the inhabitants of Oceania, particularly the Outer Party members, have no real privacy. Many of them live in apartments equipped with two-way telescreens so that they may be watched or listened to at any time. Similar telescreens are found at workstations and in public places, along with hidden microphones. Written correspondence is routinely opened and read by the government before it is delivered. The Thought Police employ undercover agents, who pose as normal citizens and report any person with subversive tendencies. Children are encouraged to report suspicious persons to the government, and some denounce their parents. Citizens are controlled, and the smallest sign of rebellion, even something so small as a facial expression, can result in immediate arrest and imprisonment. Thus, citizens, particularly party members, are compelled to obedience.

Unauthorized Mass Surveillance by DARPA In The USA

Things to Come sets out a future history from 1940 to 2036. In the screenplay, or “treatment” that H.G. Wells published in 1935, before the film was released, the story