There may be more divination card decks on the market than kombucha flavors, and they just keep coming — animal, mineral, and vegetable (really) themes with everything in between — angels, a Spanish “Días de las Muertes” (Day of the Dead) deck, and a “Crystal Unicorn” tarot. There’s even a “Mystical Manga” deck. But all were preceded by 20th century occultist Aleister Crowley’s Thoth tarot, the product of 500 years of tarot history and Crowley’s vision.

The Hermetic Order of the Golden Dawn

“Crowley had been interested in Tarot since his involvement with the Hermetic Order of the Golden Dawn; indeed, one of the tasks of Golden Dawn membership was to create one’s own tarot deck based on traditional images and magical, qabalistic, and astrological information,” according to Lon Milo Duquette, author of the definitive Understanding Aleister Crowley’s Thoth Tarot. 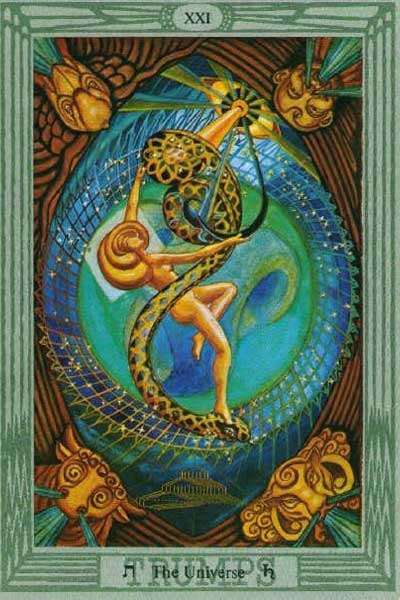 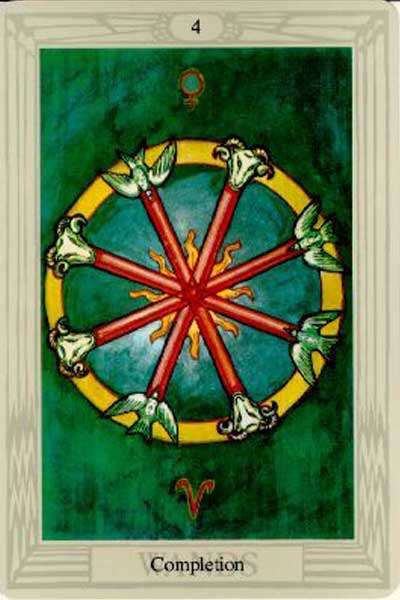 In roughly 1938, Crowley’s student, Lady Frieda Harris, suggested a re-imagined tarot based on the Book of the Law. She volunteered to produce all the art for the major and minor arcanas, saying she was directed to do so by her holy guardian angel. For the next several years, the two collaborated on the deck with Harris working tirelessly to translate Crowley’s vision to paint and canvas. According to Duquette, she had studied Rudolf Steiner’s concept of projective geometry with two of his students, and expressed those ideas in her compositions.

In his book on the Thoth tarot, Duquette writes, “When we ask what makes the Thoth Tarot unique, the first and most obvious answer is the artwork. However difficult it may be to grasp the mathematical subtleties of projective geometry, we see it thrillingly manifested in Harris’s use of lines, nets, arcs, swirls, twists and angles combined to visually redefine the fabric of space.”

The paintings, laden with symbols and references to kabbalah, astrology, alchemy, numerology, magickal correspondances, and The Book of the Law, were finished in 1943, and used to illustrate the first edition of Crowley’s “The Book of Thoth.” Crowley died in 1947, and Harris in 1952 — neither would see the paintings published as tarot cards. The Thoth Tarot deck would not be commercially published until 1969.

Duquette skillfully explores the similarities and differences between Crowley’s Thoth tarot and Golden Dawn tarot attributes. In his book he has published comparative charts illustrating complex relationships between the two systems, specifically those of the 22 trump cards, or major arcana.

The rich symbolism in the Thoth deck, and comparisons of Crowley’s archetypes to their corresponding major arcana cards, has been accomplished in Duquette’s book. That said, a look at the fool card, the alpha and omega of any version of the major arcana, is an example of the contrast of traditional interpretation to Crowley’s vision.

The fool is one of the most complex symbols in Western esoterica, from mythology to standard playing cards, and Crowley held his own views on this symbol.

The fool archetype can appear as the madman, the beggar, and the vagabond. He is usually in ragged clothing, often carries a staff, and is also portrayed with the classic jester’s hat with bells. He is first cousin to the archetypal Trickster — in fact, he often fills that role. 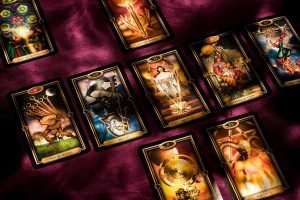 Tarot 101 The tarot (/ˈtæroʊ/; first known as trionfi and later as tarocchi or tarock) is a pack of playing cards, used from the mid-15th century in various parts of Europe to play games such as Italian tarocchini, French tarot and Austrian Königrufen, of which many are still played today. In the late 18th century, 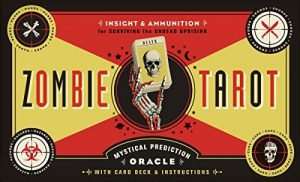 In this zombified parallel universe, wands become limbs, pentacles are biohazard symbols in the Night of the living dead, and the Major Arcana is full of shambling corpses. Along with the 78-card deck, readers will receive instructions in a 96-page