A Clockwork Orange is a 1971 dystopian crime film adapted, produced, and directed by Stanley Kubrick, based on Anthony Burgess‘s novel A Clockwork Orange. It employs disturbing, violent images to comment on psychiatry, ,juvenile delinquency, youth gangs, and other social, political, and economic subjects in a dystopian near-future Britain.

Alex (Malcolm McDowell), the central character, is a charismatic, antisocial delinquent whose interests include classical music (including Beethoven), committing rape, and what is termed “ultra-violence”. He leads a small gang of thugs, Pete (Michael Tarn), Georgie (James Marcus), and Dim (Warren Clarke), whom he calls his droogs (from the Russian word друг, “friend”, “buddy”). The film chronicles the horrific crime spree of his gang, his capture, and attempted rehabilitation via an experimental psychological conditioning technique (the “Ludovico Technique”) promoted by the Minister of the Interior (Anthony Sharp). Alex narrates most of the film in Nadsat, a fractured adolescent slang composed of Slavic (especially Russian), English, and Cockney rhyming slang.

The soundtrack to A Clockwork Orange features mostly classical music selections and Moog synthesizer compositions by Wendy Carlos. The artwork for the poster of A Clockwork Orange was created by Philip Castle with the layout by designer Bill Gold.

A Clockwork Orange - The Film 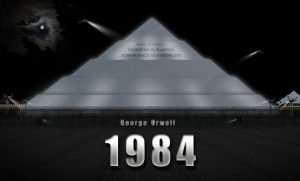 George Orwell’s 1984 In George Orwell’s 1984, Winston Smith, an intellectual and member of the Outer Party (middle class), lives in the ruins of an England already ravaged by World War II, civil conflict, and the revolution which brought the

Soylent Green (the cult movie) Tuesday is Soylent Green Day! The 20th century’s industrialization has left the world permanently overcrowded, polluted and stagnant by the turn of the 21st. In 2022, with 40 million people in New York City alone,